This story takes place near the small town of Treseburg, near Thale. Published in the collection Legends and Tales of the Harz Mountains, by Toofie Lauder in 1881. 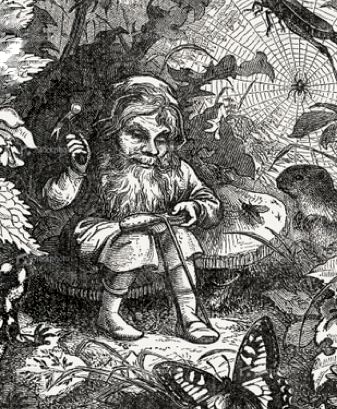 From the windings of the Bode, a huge greenstone rock rises steep and rugged, partially overgrown with the Planta genista, or wild broom, and creeping plants, nearly its entire base being washed by the waves of the clear mountain stream.

On its summit, half hidden by moss and wild thorns, are grey ruins of a castle, of which no trace of its history is left to us save its name- the Treseburg.

At the foot of this massive rock, on the opposite bank of the Bode, stood, nearly two hundred years ago, a small cottage, in which dwelt a poor but good fisherman, who earned but a scanty subsistence from the fruits of his toil.

At that time, thousands of strangers did not, as now, visit the sublime rocky valley, to enjoy its wild and savage grandeur, and its trout and merlins, and the poor man, though naturally of a contented mind, often murmured at his poverty.

Also the romantic situation of his cottage satisfied him no longer, and when he looked across the Bode to the mighty rock, and the ruins on its top, all sorts of foolish and ambitious thoughts crowded his mind.

These reflections were all the more bitter since there was a tradition in the village that he himself was a descendant of the ancient Ritter (knight) who once ruled in the Treseburg.

And in fancy he pictured the old Schloss in its former state, throned on the proud rock, with giant round towers, and arched entrance gates, and Gothic windows, the battlements covered with soldiers in steel harness, with sword and lance.

Thus he frequently sat hours at a time by his nets, lost in dreams, ever glancing again across to the wild ruins, and wishing the long-vanished centuries back again.


Once- it was a St. John's day -he saw a Graumännchen (Little Gray Man) on the other side of the stream, who evidently wished to cross, but did not venture to wade through, since the waters had risen in the late thunderstorm, and there was at that time no bridge.

Graumännchen seem in great embarrassment; this awakened the pity of the fisherman, and he called across that he would come and carry him over the water. He waded over and did as he had said.

Graumännchen was much pleased at this kindness, thanked the fisherman in the warmest terms, and said, "Thou art a good, obliging man, and since thou hast fulfilled my wish, I could wish that thou also hadst a wish or two that I might grant."

"Ah!" said the fisherman, "Every one has wishes. I have just one, but it cannot be realized."

"Only one?" said Graumännchen. "I would grant thee willingly two or three. But what might be thy wish?"

"My greatest wish," replied the fisherman, "is to be set back five hundred years, in order that, instead of that heap of ruins across there, the Treseburg might raise its proud battlements and tower."

"Well," said Graumännchen, "that can easily happen," and bade him close his eyes for a minute. He did so, and on opening them again gazed around him in wonder, for there opposite on the dark rock stood the Treseburg, that he had so often seen in ruins. Really and truly there it stood, with white walls, colossal round tower at the entrance, battlements shimmering in the sunlight, and squires glittering in steel, with sword and lance.

The fisherman almost devoured the singular picture with his eyes, and in his admiration could not turn away his gaze, till Graumännchen put an end to his puzzlement with the question, "Thy wish is granted; art thou satisfied?"

The fisherman hesitated, for it seemed to him at the moment as if he might add another wish. At the same time the immediate fulfillment of his wish appeared to have its shady sides, for the soldiers who stood on the walls of the castle grew noisy, and called down to him with abusive and threatening words, and commanded him at once to bring up all the fish and other articles of provision which he had, or his last hour was come.

Some even, as if in joke, bent their cross-bows toward him, and one pointed iron bolt lodged in the trunk of a rotten tree close by him.

Finally the fisherman replied, "yes, the fulfillment of my wish is delightful, and the Treseburg is a right stately Schloss; but I should like, as my ancestors once ruled there, to be transplanted into the position of my ancestor who lived there five hundred years ago, in exactly the same circumstances."

"Very well," said Graumännchen; "also this wish can be granted," and bade him again to shut his eyes.

When he opened them he found himself in a spacious hall, its stone walls adorned with armor and arms, and on a massive oak table lay also arms, partly broken, partly covered with fresh blood.

From without, a wild deafening noise penetrated to the hall, mingled with loud shouting, sometimes a piercing cry of pain, and the clashing of arms.

He lay himself, in steel armour, on a bench, but one arm was free from armour, and he felt a burning pain in it, and to his terror he observed a gaping would as from the blow of a sword, stretching from the shoulder to the elbow, and the warm blood trickled down.


A door opened, and an old squire entered and said, "I left you a moment to prepare an ointment for your wound, in order that you may yourself appear on the wall and defend the Schloss. The danger is great, Herr! Listen! They are storming again already, and our men are so weak from hunger and thirst, they can scarcely stand.

And the old man hastened away. The transformed fisherman grew dizzy, and felt extremely uncomfortable.

But he had little time for reflection, for the tumult grew louder and came nearer. The door of the hall was broken in with heavy blows, and with loud shouts a troop of men, dripping with blood, rushed in and threw themselves in rage upon him, crying: "We have thee at last, thou foul knave! Thou who hast robbed and murdered so many! At last the hour of retribution has come."

And the leader cried: "Fasten a rope to the arch of the gates, give him an hour to say his prayers, but in the deepest dungeon, and then hang him for a punishment and a warning."

And strong arms seized him and threw him in the dungeon on damp straw. There he lay, and could not for some time collect his thoughts; but when he came to his full senses deep sorrow seized him to see what he had brought upon himself through his foolish wish. Now he must die as a criminal, separated from wife and children, who would never know what had become of him.

"Ah!" cried he in anguish. "Graumännchen! Why hast thou done this? If thou hast granted me, fool that I was, two wishes, so grant me the third- the only one I have -to return home," and hot tears rolled down his face.


But when he had dried his eyes, and opened them again, he drew a long breath, for he lay on the banks of the Bode beside his nets, which had filled with fish; and of Schloss and Ritter was nothing to be seen- only the ruins as ever.

Graumännchen stood by him, pressed his hand, and said with a friendly smile: "Willst thou be henceforth contented, or hast thou still another wish?"

"Nein! Nein!" cried the fisherman decidedly, "I have not a wish but to remain what I am my life long."

Graumännchen took his departure with a smile, and the fisherman's dreams of castle and knight with him.

For many years he related only to his wife what had happened, but as he grew old he told the history to his sons, that they might learn therefrom the same lessons as himself.

They laughed to themselves, and held the whole story for a dream, save one brother, who found something very remarkable in it, and when he had a leisure hour he climbed the rock where the Treseburg had stood, observed the direction of the walls and the moat, and removed the moss, underbrush, and thorns.

At last he seemed to have found what he sought. One clear moonlit night he mounted with hook and shovel to the ruins; there, where once the tower had stood, he measured three times seven paces to the west from the tower, and the same distance from the gate southward. Then he began to dig and soon came to a vault.

The following day the villagers who had gone to gather sticks found a vault broken in, and a half-rotten chest open, but empty, and on the ground around lay scattered gold and silver coins with an unknown stamp.

Read more Harz fairy tales, or hike to Treseburg from Thale. Tips on traveling to the Harz.