More than 70 years have passed since the Nazi enclave on the Obersalzberg was destroyed. 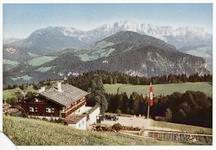 The government of Bavaria has removed most of the buildings associated with that period in attempt to restore the area to its original pastoral atmosphere and, many suspect, to erase evidence of a controversial period of their history.

It was on the Obersalzberg that Hitler made his home, along with Hermann Goering and Martin Bormann. High level meetings were held here, and many important decisions affecting the lives of millions were made by Hitler sitting in his mountain retreat.

Hitler purchased Haus Wachenfeld up on the Obersalzberg, and enlarged it to create his alpine residence, the Berghof. 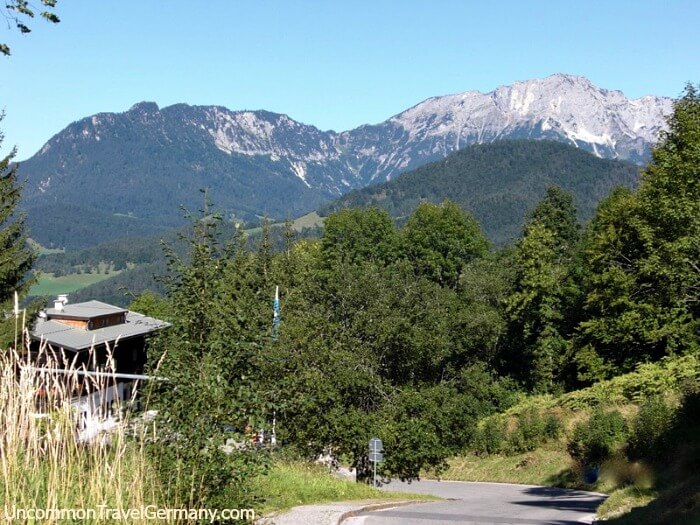 In spite of the changes there is still a lot to see for those interested in World War II history.

The road around the area is like a loop; The Berghof and Hotel zum Türken are on the other side of the loop from the Documentation Center and parking lot.

A good place to start is the Documentation Center.

The official tourist attraction on the mountain is the historical museum, opened in 1999. This is an extensive museum that covers the history not just of the Obersalzberg, but the Third Reich in general, with many photographs and fascinating documents from the Nazi era.

The text is in German but an audio version in English is provided for a small fee. There is also a scale model of the mountain showing the locations of the wartime buildings.

The exhibit was installed in the former Gasthaus Hoher Göll, used for important visitors during the Third Reich, located just down the path from the large parking lot off the main road coming up from Berchtesgaden (see maps below).

As a bonus, visitors have access to the bunker system under the former Platterhof Hotel, which was torn down in 2000 and made into the parking lot just above the Center.

The exhibit is open year round, and the entry fee is 3 Euro.

A huge expansion is underway; this museum has become so popular, it is being overwhelmed by the number of people coming to see it. The Documentation Center was planned for 30,000 to 40,000 visitors a year, but now 150,000 to 160,000 are showing up.

The building will more than double in size, and the project is expected to last three years, funded by the Bavarian government.

The area looks a bit of a mess with the barricades and cranes, but the museum is open during the construction. The bunkers under the center were closed, but are open now.

Even though the bunker system travels through much of the hillside, most of the tunnels are now sealed off and inaccessible.

There are two intact bunker systems open to the public on the Obersalzberg. One is under the Documentation Center and included in the museum entry.

The other bunker is under the Hotel zum Türken, just further down the road past the large parking lot, accessible through the little office on the side of the hotel 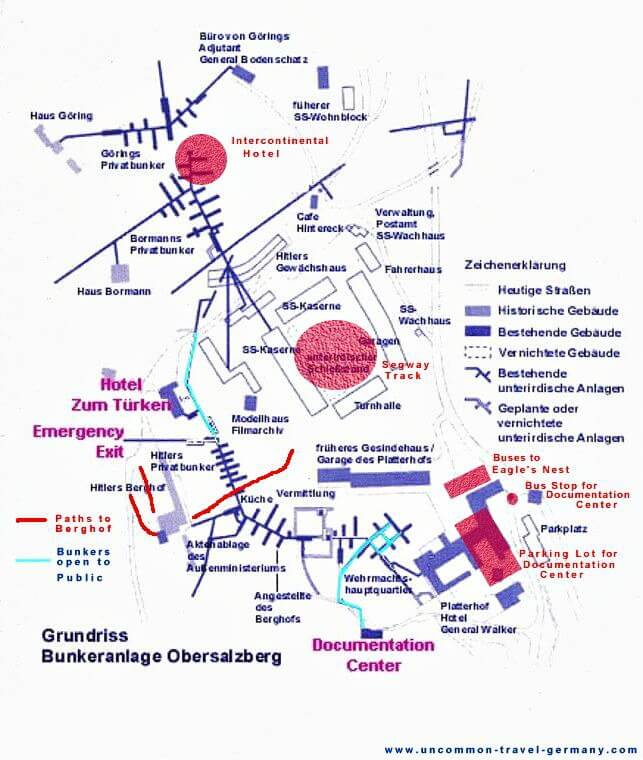 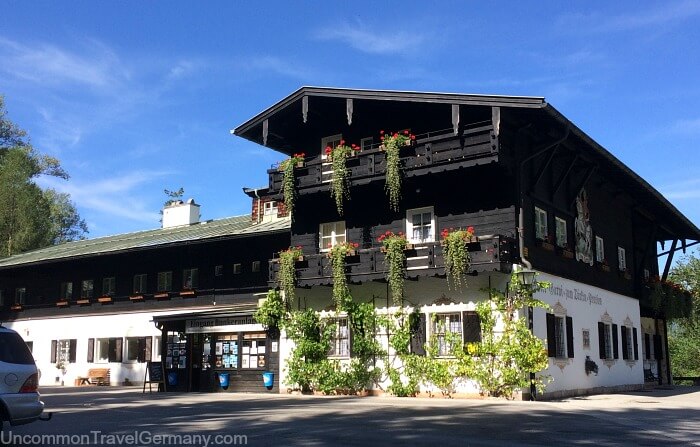 The Documentation Center bunker is a partially completed one; metal walkways have been installed for visitors and given the popularity of the Center, there are usually quite a few people exploring them.

For a truly eerie experience, head for the Hotel zum Türken's bunker. You will probably be the only one down there. A maze of tunnels and rooms on three levels is available for exploration. If you are somewhat agile, you can climb the metal rungs up into the machine gun nests tucked in here and there.

The passageways are well-lit, but damp and creepy. Fortunately, the walls have signs at turning points with the way out clearly marked; otherwise, it would be easy to get lost down there.

One tunnel leads to the entrance to Hitler's bunker in the Berghof, which was just next door to the hotel.The tunnel is bricked up at that point so you can't get into the Berghof's bunker, but standing next to it is a haunting experience.

The main road around the Obersalzberg goes past the Hotel zum Türken and the path leading to the ruins of the Berghof. (See map at bottom.) 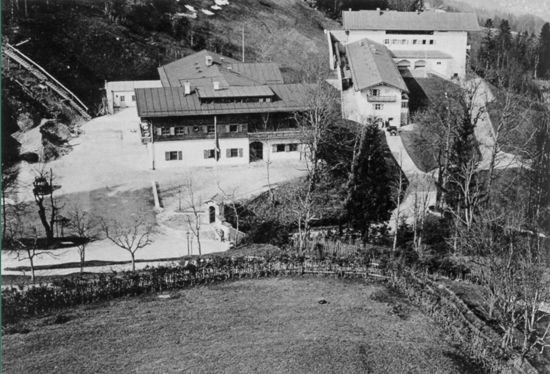 The trees have taken over the place where Hitler's house stood, but the two driveways are still recognizable at the point they leave the road below the hotel. 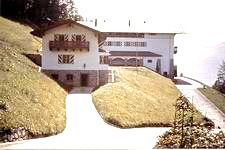 The right path was the driveway leading to the main entrance of the Berghof.

The left driveway has become a small path that leads to the Berghof ruins. You'll see a yellow sign (which doesn't mention the Berghof) at the edge of the road. 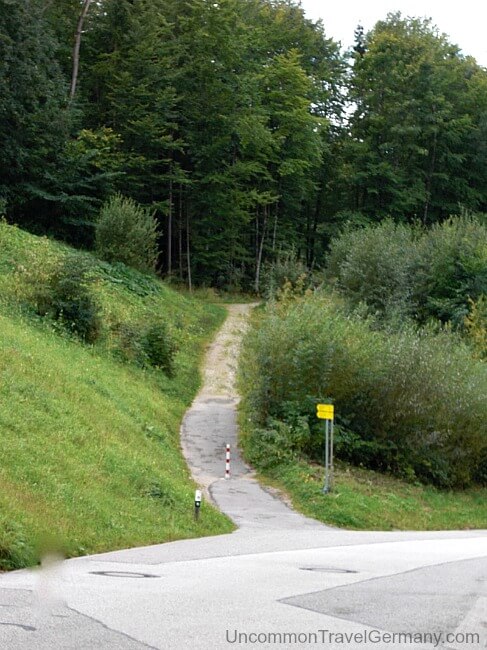 The second driveway, which led to main house, is basically gone, with the exception of a small patch of tarmac just off the edge of the road. 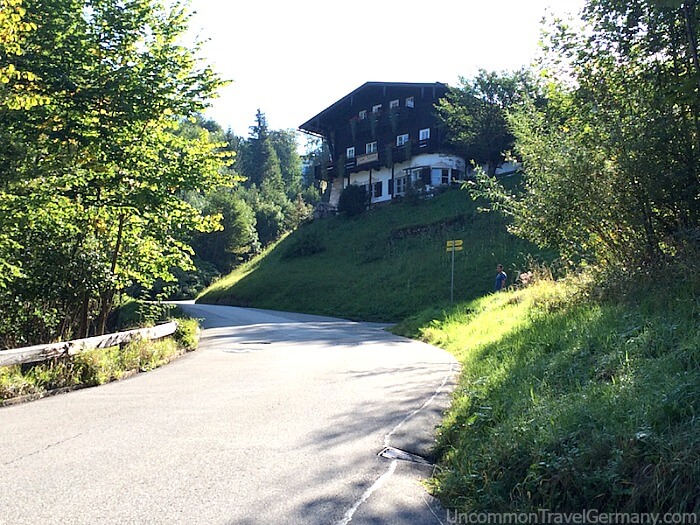 View of hotel from the second driveway location

Just inside the forest are the remaining foundation walls of the Berghof. Visitors usually have the place to themselves, since it is unmarked. 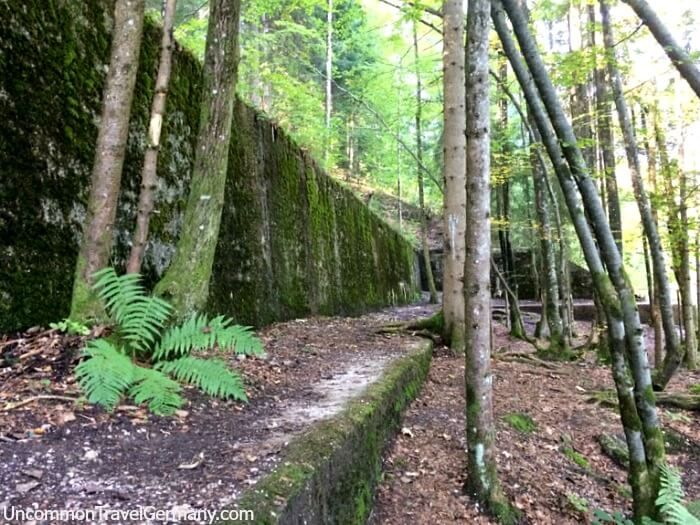 The Berghof was blown up by the Bavarian government in 1952 and the ruins were cleared away later, leaving just the rear retaining wall of the left wing, and part of the foundation under the main house where the grand staircase had been. 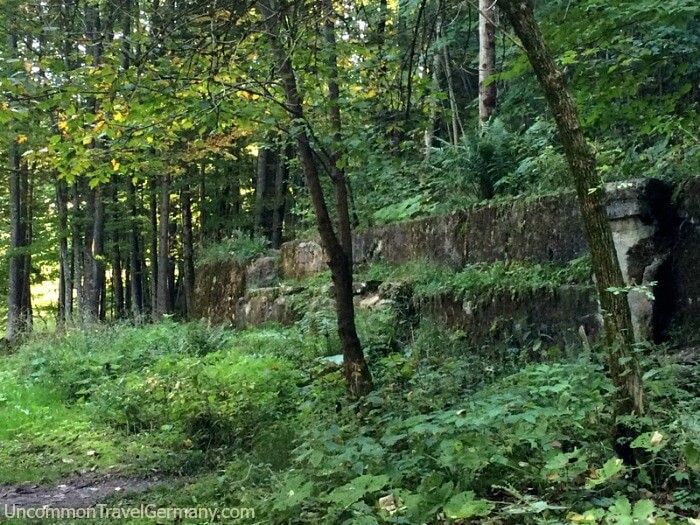 Foundation of the main house

The sign below is posted at the entrance to the left path that used to be the driveway to the Berghof's east wing. It gives directions to five other places; no mention is made of the Berghof location only a few meters away. 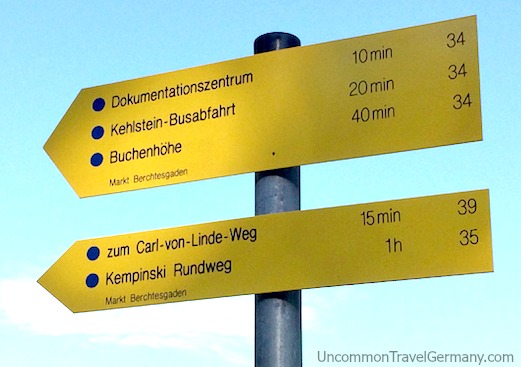 The only official recognition of the site is a billboard installed in July of 2008, inside the wooded area (photo was taken standing where the building used to be). 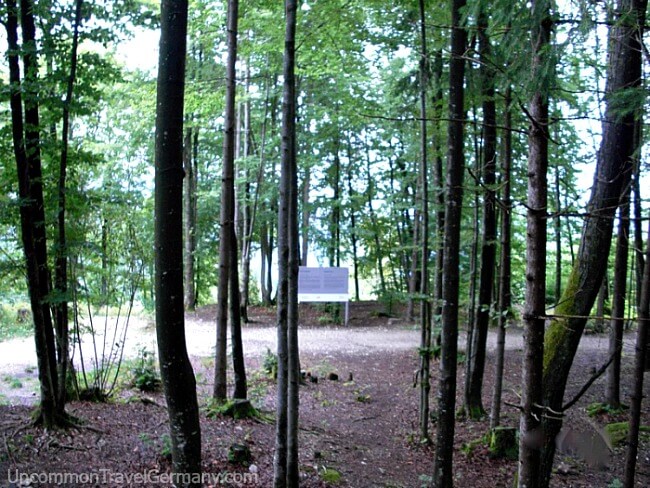 Another approach to the Berghof is from the back side, following the path leading into the woods from the flat area where guests of the Kempinski Hotel do some activities. 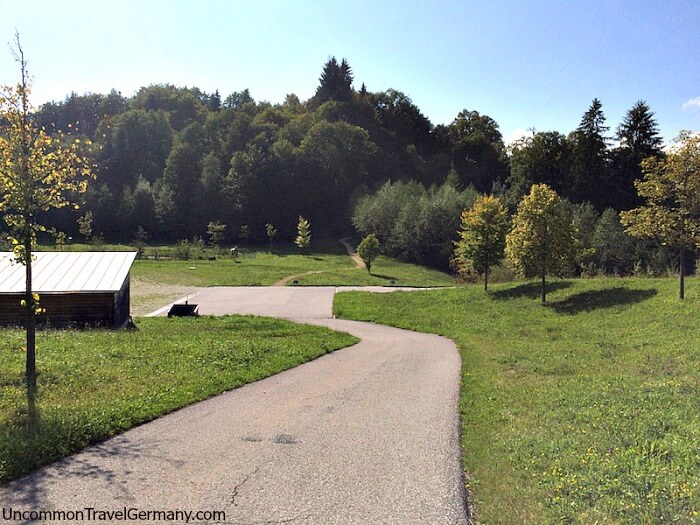 The back way to the Berghof

There used to be a large complex of buildings in this area called Barracks Square, where the SS troops were quartered. All traces of the barracks have been removed.

The field is now part of the Kempinski Hotel complex (the hotel is visible in the background). In the photo below, the path to the Berghof is out of sight on the far left. 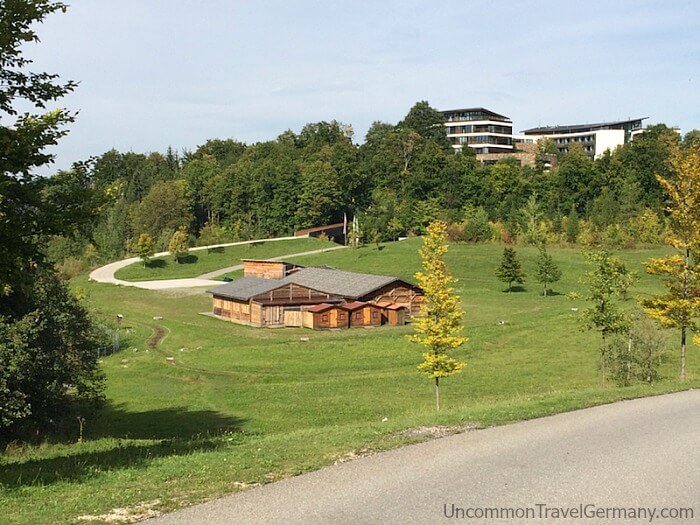 This field starts just below the Documentation Center parking lot. If you go down the stairs on the far right of the parking lot, near the bus stop for the Eagle's Nest, you will see the field and the road leading to both the Kempinski and Türken Hotels.

In the image above, the Türken is just out of sight, in the trees past the bridge in the far distance, to the left of the Kempinski Hotel.

You can follow the road all the way around the field; it will take you under the bridge and past the Türken.

For lots of additional information and photos of the Berghof, then and now, see Berghof. 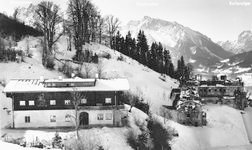 One of the most remarkable survivors from the past is the Hotel zum Türken. Heavily damaged in the bombing raid of April 25, 1945, this delightful hotel literally rose from the ashes and is back in operation.

The hotel in various forms has been hosting visitors to the Obersalzberg since the 1600's. 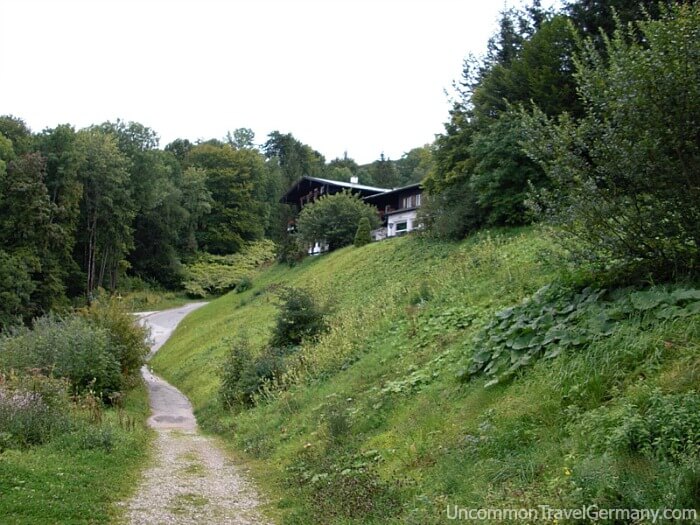 The hotel was taken from the owners in 1933 when Hitler moved in next door and used to house members of the Security Service guarding the Führer. After the war, the owner's daughter got it back and restored it.

Today it is owned and operated by the family of the wartime owner. Staying at this hotel is not only convenient for sightseeing, but it has the cosy look and feel of the 1940's and possibly the best view in Berchtesgaden.

The bus for the Eagle's Nest leaves from the Obersalzberg.

The only way up to the Eagle's Nest is by way of the specially modified buses designed to make the steep climb up to the elevator leading to the building. This was an amazing engineering achievement and the view is spectacular on a clear day.

The building was never damaged; it's now a restaurant and structurally is basically as it was during Hitler's time. The marble fireplace, a gift from Mussolini, is still there. (Hitler lived at the Berghof, not the Eagle's Nest. He only visited it a few times, but Eva Braun was often there.)

The Bus Stop. The buses leave from a spot just below the parking lot for the Documentation Center; standing on the road, the steps leading down to the buses are on the right.

Tickets can be purchased at the bus stop and reservations are not necessary (cost: around 16 Euros). The buses only run during the warmer months, May through October, depending on the weather. Snow makes the trip too dangerous.

Other Buildings on the Obersalzberg

The largest building on the mountain is the newish, Kempinski Hotel Berchtesgaden, formerly the Intercontinental Resort Berchtesgaden. The large luxury complex sits on a hill where Hermann Goering's house once sat (the exact location is probably where the pond is on the edge of the hotel grounds). The open field in front which used to be the SS barracks is now a Segway track for the hotel guests.

The construction of a luxury hotel on this particular site was controversial; some felt it was inappropriate to build a large, fancy hotel in an area associated with such a dark history. Others felt it was returning the area to its original tourist character. For more info on the hotel, see Kempinski Hotel.

The only trace of the Platterhof Hotel, which became the General Walker Hotel, is the building next to the parking lot housing the restaurant and the long row of souvenir shops next to it.

Martin Bormann's house was just across the road from the Türken Hotel and into the woods a few dozen meters. It was heavily damaged in the bombing and the ruins were almost completely removed, so there isn't really much to see there.

Across the little valley (now a golf course) in front of the Berghof, was Hitler's Tea House, a small building that Hitler used to walk to daily from the Berghof. It survived the bombing, but was later destroyed. All traces of the ruins were removed in 2007; the Tea House was in the woods just off the 13th hole.

I thought this was an interesting travel article about the Obersalzberg.

How to get to the Obersalzberg 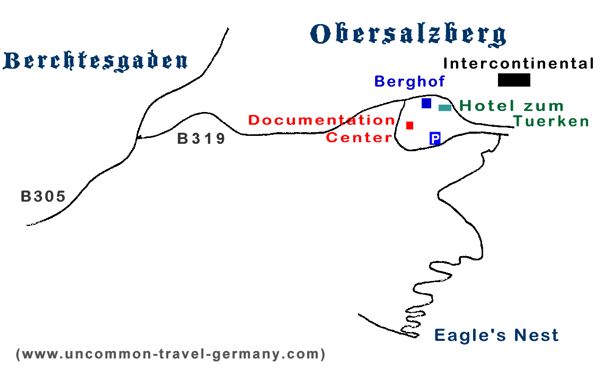 The Obersalzberg is about a ten minute drive above Berchtesgaden. The main highway through Berchtesgaden (highway B305) passes by the Bahnhof and follows the river.

The road to the Obersalzberg (B319) leaves highway B305 in the center of Berchtesgaden and winds up the hill. Follow the signs to the Documentation Center; there is a large parking lot on the left side of the road.

There is regular bus service approximately every hour from the Berchtesgaden Bahnhof for the 12 minute ride up the mountain, but the last bus leaves around 6:15 p.m. (5:15 p.m. on weekends). The schedules are posted at the bus stop in front of the Bahnhof. It is bus #838, but check the listing.

The name of the stop is "Dokumentation"; it's right next to the entrance to the parking lot. You can get a copy of the bus schedule at the Tourist Information Office across the street from the Bahnhof.

You can get taxis near the main square in Berchtesgaden and there is a taxi stand in front of the Bahnhof. The taxi office is staffed 24 hours a day; it is just inside the right side of the train station building.

If there are no taxis outside, they will call one for you. A taxi to the Obersalzberg costs about 10 Euros; a little pricey, but handy if you need a ride after 6 p.m.

Map of the Obersalzberg Area 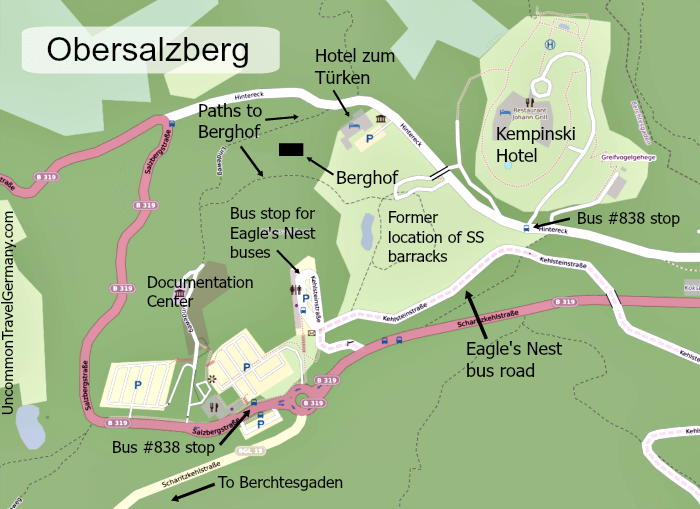 For more information on the story of the Obersalzberg, along with historical photos, see Obersalzberg history. 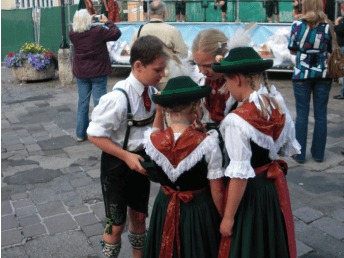 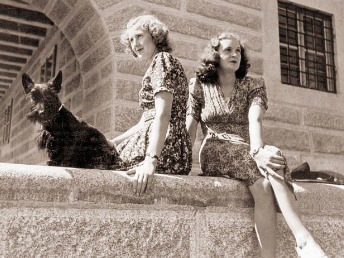 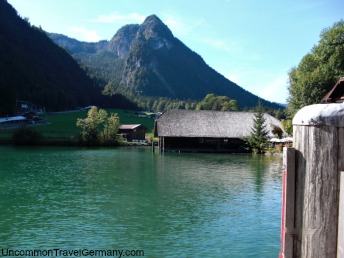 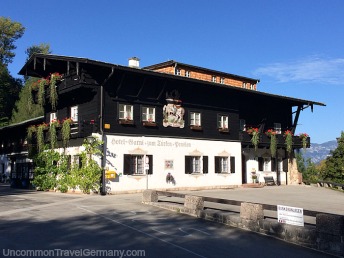