There are a number of ways to travel to Colditz. It may sound complicated at first, but it's actually pretty easy to get there once you know how.

Travel to Colditz Without a Car

The town of Colditz sits in a river valley in an area of rolling hills and farmland, 24 miles southeast of Leipzig in the eastern part of Germany. 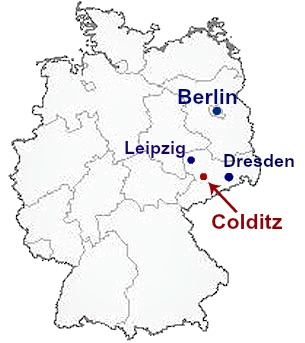 Coming from outside of Germany, travelers can fly into the Leipzig-Halle airport or fly into Berlin and travel by train to Leipzig (about a 1 hour ride on the fast ICE trains, leaving Berlin about every hour). Leipzig is the closest major city to Colditz.

You can take the train from Leipzig-Halle airport to the Leipzig main train station (Hauptbahnhof), where you catch another train to get to Colditz. The trip from the Leipzig airport to Colditz takes about two hours and involves taking two trains and a bus, (or a train and one bus weekdays) but it's not difficult (see details below).

Flying from the UK:

Ryanair has some really cheap flights from London-Stansted airport to Leipzig-Halle airport outside of Leipzig, near the town of Schkeuditz. 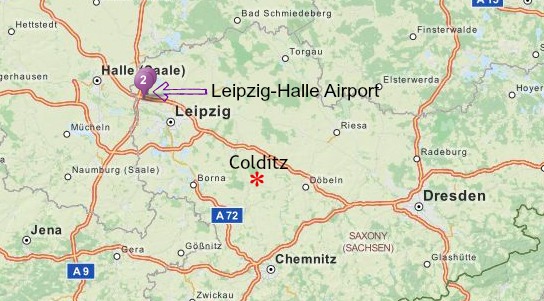 From Leipzig to Colditz

Train service into Colditz was eliminated a few years ago. You can get there by a combination of train and bus, or two buses (the direct bus seems to have disappeared again). The trip used to require taking a train to one of the smaller towns (Grossbothen, Grimma, Bad Lausick or Tanndorf), then a bus to Colditz.

Now on weekdays, you can choose either the two-bus option or the train/bus combo, but on weekends you still have to do the train/bus combo via Bad Lausick or Grossbothen. Check the Deutschebahn schedule for the times. It sounds complicated, but it's not really; it's just that there are a lot of different ways to get to Colditz.

At the moment, there's no direct bus between Leipzig and Colditz (this service seems to come and go periodically). On weekdays, you have the option of taking two buses to Colditz, changing at Grimma.

This is a smooth and easy way to get there. Bus 690 leaves the Leipzig Hauptbahnhof, arrives in Grimma at the train station, then Bus 619 arrives very soon after at the same location, and takes you on to Colditz Sportplatz.

The bus trip takes about 90 minutes and costs 7.50 Euros each way. You can check the schedules for the two buses on the Deutschebahn site; they seem to be well synced for travelers going on to Colditz. The buses are very prompt and the drivers are helpful.

Getting on the Colditz bus in Grimma

Tip: you can save money by getting a day's regional bus pass, instead of buying the tickets individually.

Many thanks to the recent visitors from the UK who shared the latest bus information (plus some great photos)!

Bus 690 leaves from the east side of the Leipzig Hauptbahnhof (called Hauptbahnhof Ostseite, Leipzig, on the DB website). When you walk out the doors of the train station in Leipzig (facing the city), go left and a short distance away you will see a bus stop (yellow circle on top of the pole). The Colditz bus leaves from there and they have the schedule attached to the pole.

The train/bus combo is still the way to get there on Saturdays and Sundays.

Part One: The Train

The trains towards Colditz run daily about every hour from the Leipzig Hauptbahnhof (an interesting sight in itself - one of the largest train stations in Europe), mainly alternating via Grimma (33 minute trip) or Grossbothen (43 minute trip), or via Bad Lausick and sometimes via Tanndorf.

Best bet: a new bus line (#613) going from Bad Lausick to Colditz has opened recently; this bus line runs every hour or two hours on weekdays (less frequently on the weekends) from Bad Lausick, leaving about ten minutes after the train from Leipzig arrives.

The Deutschebahn website says Bus 613 doesn't run every day during the Feb to June time period, so check the schedule for those dates. Going via Bad Lausick is now more convenient than going via Grossbothen, Grimma or Tanndorf.

The remainder of the trip is via bus to Colditz.

Regardless of which town you travel through, the total time is the about the same, 1 hour and 18 minutes to Colditz from Leipzig.

You'll be catching a bus from one of the small town train stations and the train schedule will tell you the bus number for Colditz.

The bus part of the ride to Colditz ambles through various little towns and gives you a good view of the surrounding countryside. It is very comfortable and air-conditioned. 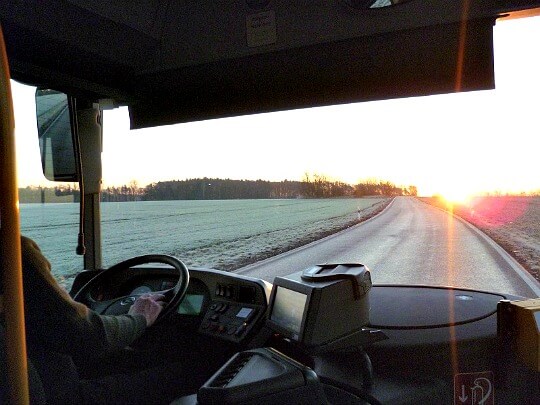 Bus ride to Colditz on a winter morning

Don't get off at the first stop (Leipzigerstrasse) in Colditz; you'll be on the wrong side of the river. Get off at the next stop next to a playing field (Sportplatz is the name of the stop) which is just outside the old part of town. Ask the driver to be sure (ask for "Colditz Sportplatz").

Cross the street and head into the town on Nicolaistrasse. Go about two blocks until the street ends, then go left, then immediately right onto Untermarkt and you will be in the old town center with its market square and, of course, the castle above it. (See map of Colditz below.) 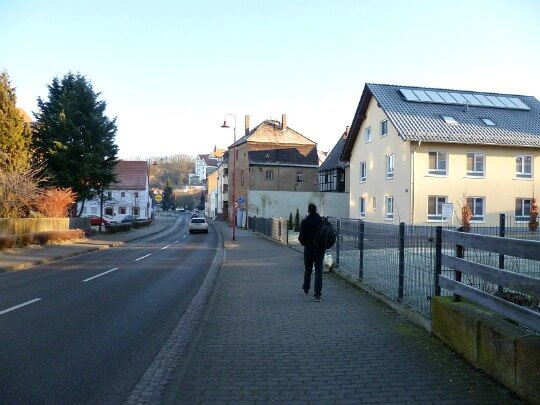 You can also take a taxi from the Leipzig Hauptbahnhof, though the bus or train would be cheaper and almost as easy.

I haven't tried the Grossbothen route, but some Australian visitors used it and generously shared the following information...

Grossbothen station is inactive (deserted). When you get off the train, facing the station, go left and walk about 250 meters to a main road (Colditzer Landstrasse). At the main road, turn right and walk about 50 meters before crossing the road to the bus stop. The stop has a posted timetable for the #619 bus.

The bus will be heading down the hill in the direction of the railway overpass. Tell the driver "Colditz Sportplatz"; it's the second stop in Colditz, a couple of minutes after it crosses the bridge. They also mentioned there was nowhere open in town to eat after 6:00 p.m.

You can travel to Colditz by taking the train to Grossbothen, then bus #619 to Colditz. Get details from the train station in Dresden when you get your ticket.

Important Note: I've included schedule information to give you an idea of how often and when the the trains and buses run, but the days and times are subject to change at any time, so before making plans, please check with the German Railway for current bus and train schedules, at www.reiseauskunft.bahn.de (in English).

Travel to Colditz by Car

There is a major highway, A14, running east-west between Leipzig and Dresden. Coming from the Leipzig direction, head east until you get to the Grimma exit onto B107 south.

The sign should say Rochlitz/ Colditz. Coming from Dresden, watch for the same exit and head south. Stay on this road all the way to Colditz. 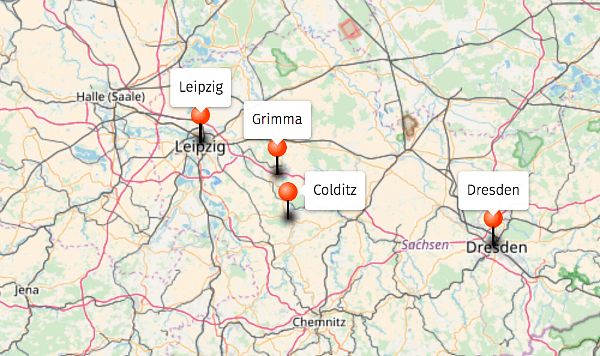 Just before the Mulde river on the edge of town, Highway B107 turns sharply right. Keep going straight on B176 and cross the bridge over the river.

You will now be in the old part of Colditz, which is very compact. The Markt (town square) and the castle are all within a couple of blocks . You can't miss the castle. It towers over the town and you can see it from far away. 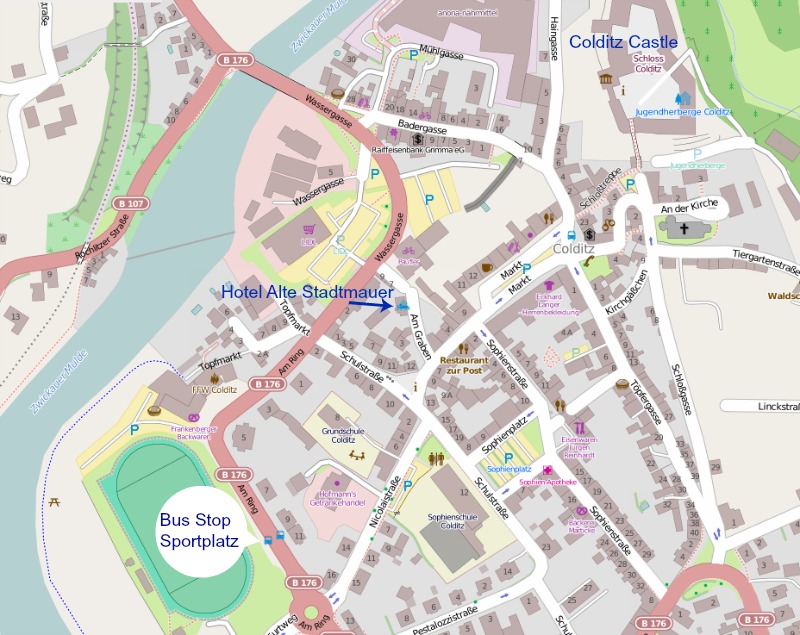 Special thanks to Pete Nowakiwskyj and Ian Hall for providing the additional information. 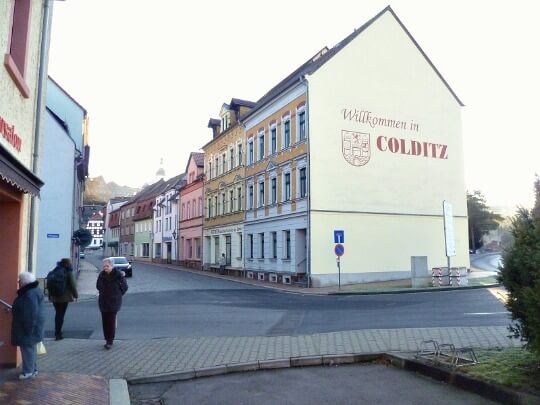 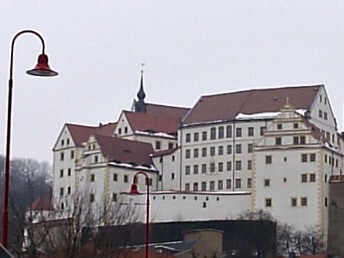 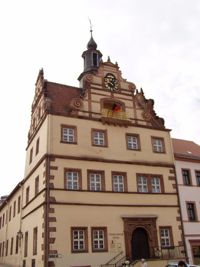 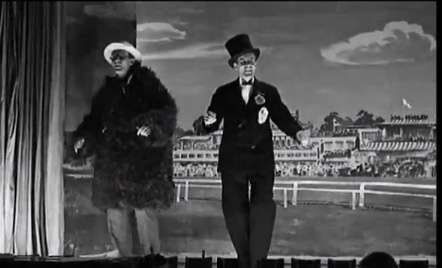