The Legend of the Rosstrappe

The hoof print on the Rosstrappe: the story of Princess Brunhilda and her escape from the giant Bodo. Published in the collection Legends and Tales of the Harz Mountains, by Toofie Lauder in 1881. 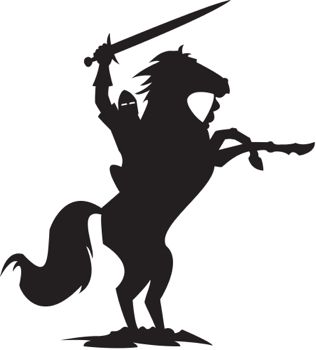 Ages ago there ruled a king in Bohemia whose castle stood on a lofty mountain, where the thunder and the eagle found a home.

This King had a daughter, the golden-haired Brunhilda, the fame of whose marvelous beauty was spread far and wide.

Mighty rulers and the sons of kings sought the hand of the lovely royal maiden, and among the numerous wooers came the son of the king of the Harz, who won her heart; and after the lovers had sworn everlasting fidelity, the Harz prince returned to his father to announce his betrothal and make arrangements for the nuptials.

After his departure, there arrived a new suitor for Brunhilda's hand whom her father feared to reject. This was one of those terrible giants who inhabited North Europe. They were invincible, and when they appeared, all yielded with terror to their might.

This dreadful lover brought the Princess costly gifts of gold, amber, and precious stones. The father, after three days of thinking it over, promised the Giant his daughter.

Brunhilda threw herself horrified on her knees before her father, weeping and tearing her hair; but the king, though moved with pity, assured her the Giant had power to destroy him and his kingdom.

From this hour Brunhilda appeared composed. She neither wept nor complained, but met her destined bridegroom with a solemn dignity. Of a truly kingly character, she constrained her agony to silence, but hoped ever for deliverance through the return of her Harz lover; still he came not.

Now the Giant had two steeds- giant steeds -one white as the snows of the Northland, his eyes shining like stars; the other, the Giant's body-horse, black as the night, with eyes like the lightning, at whose running his hoofs resounded like thunder, and the earth trembled and shook. Both these steeds seemed in the chase to overtake the storm, and kept time with the lightning.

Brunhilda saw these giant steeds, and the thought of flight occurred to her.

Was success possible? She had never mounted the snowy steed.

Great was the Giant's joy when Brunhilda begged to ride with him. She mounted daily the terrible animal, and soon could ride a race with the Giant on the mountains.

At last the evening before the nuptials arrived, and Brunhilda having arrayed herself in white robe, a golden crown, and a long white veil floating behind her, and the amber and diamonds, the Giant's gifts, welcomed the numerous guests who thronged the royal palace, and looked lovingly upon the Giant Bridegroom, who was overwhelmed with an unheard of bliss at the lovely vision.

At length the Princess rose and retired, the Giant remained to drink of the costly wine. Suddenly he heard the snorting and stamping of his war-steeds! He sprang up and looked down into the courtyard.

There sat Brunhilda in her glittering robes, the golden crown still upon her head, her white veil and golden hair fluttering in the wind, in her fearless courage and queenly beauty, upon the snowy steed before the open gates.

At the sight of him she let loose her reins, and the mighty steed shot forth, swift as the storm-wind, like a streak of light, into the darkness of the night.

The Giant uttered a cry of fury that shook the castle to its foundations, seized his battle-axe, and mounted his war-horse, crying:"If she flee to the Nidhöggar (a dragon in the Old German water hell) in the Schlangengrund (Valley of the Serpents) I will bring her hence!"

And now begins the fearful race. Through meadow and forest, over mountain and ravine, flee the pursuer and pursued, the white steed always in advance, fleeing swift as a meteor through the heavens; behind, the black steed, like a spirit from the eternal darkness.

All through the night lasted the terrible ride. The earth groaned and thundered, the forests trembled, the birds and beasts fled in terror, long streaks of fire swept through the grim darkness, and the snorting of the steeds was like the roar of the Northwind.

At length dawn reflects her rosy blush over mountain and wood. Brunhilda utters a cry of joy and triumph! There before her lies the Harz, her lover's mountain home and future kingdom! That distant peak is the Brocken!

She spurs on her noble steed till she reaches the Hexentanzplatz, when suddenly he stops, rears, and plunges, and refuses to advance. Before her yawns the terrible rocky abyss of the Bode Valley, behind she hears the deadly foe advancing, uttering the most dreadful curses!

What shall she do? Forward over the wild abyss? Backward is to fall into the arms of the enemy.

The choice is not difficult. She turns his head to the fearful chasm, and spurs him on.

Like an eagle, the noble animal leaps the yawning abyss, lands safely on the other side, and impressing his giant hoof-print in the granite, sinks exhausted, but the Princess loses her golden crown in the gulf beneath the Bode Kessel!

The Giant in rage and fury spurs on his dusky steed to leap after her, but falls and is broken on the rocks, and ever since, transformed into a hell-hound, he guards the golden crown in the Bode Valley.

The princess, saved, dances for joy, and her footprints are still to be seen in the solid granite.

The mountain has ever since been called the Rosstrappe, and the Giant Bodo gave his name to the valley and river.

Go to Thale for information on visiting the Rosstrappe and the Bode Valley in Thale.

On the top of the Rosstrappe above Thale, you can see the "hoof print" of Brunhhilda's horse. From the Hexentanzplatz on the opposite mountain, you can look across at her leap to the Rosstrappe. 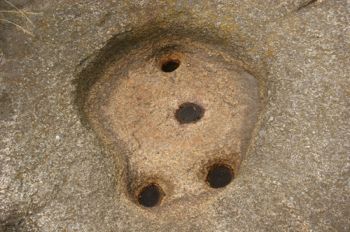 "Rosstrappe" comes from "Ross" (steed or horse) and "trappen" (clip-clop).