The Castle Fairy of Osterode

A story about Osterode Castle. Published in the collection Legends and Tales of the Harz Mountains, by Toofie Lauder in 1881. 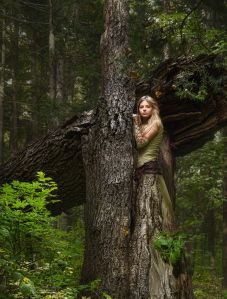 One Sunday morning early, a poor linen weaver was walking to Osterode. Aurora showed her gaily laughing and blushing face above the green mountains, a balsamic freshness floated over the valleys and streams, the peaks of the woody heights swam in the blue ether, and the dew-bathed mountain flowers sparkled in the sun's golden splendour. The songs of the birds rang out of the thickets, and soft chimes rose from the villages summoning to worship and praise- a mild, blissful peace hovered over the entire scene.

It was long before the wanderer noticed these surrounding beauties of the morning, for a heavy sorrow lay at his heart. A beloved wife lay at home ill, six hungry children waited with her anxiously for his return, and he must return with empty hands.

His rich cousin, from whom he had hoped for assistance, had repulsed him with cruel words, and now his future lay dark and hopeless before him.

But as the sun rose higher, as all Nature bloomed and sent forth her frankincense of praise, and the streams murmured of peace, he grew more composed.

"How glorious! how wonderful!" he thought, as he stood still and gazed around him; "and what a mystery it is that only man is so often shut out from the universal enjoyment of creation. Why should he be crushed to the earth, and provide in sorrow and pain for his bodily sustenance, while the birds sing and the flowers bloom free from care? Doth He not clothe the lilies, and give the rose and violet their perfume and exquisite hues? Can the Eternal Father care less for an immortal soul? No, no, never!"

He began again to move forward, singing that noblest hymn in the German language, beginning-

When he came at last to the lines...

...he quickened his pace with a firmer tread and lighter heart. Perhaps he would have sung on to the end of the hymn, had not a voice, clear as a silver bell, greeted him with "Guten Morgen!"

The singer looked in the direction of the voice, and stood like one transfixed at the sight of the vision before him.

On the banks of the brook which flowed past his path sat a lovely maiden clad in white, and bathed her marble-white feet in the crystal water.

Before he could recover from his astonishment, the figure rose and approached him, saying in a voice of the most delicious melody-

"Thou sangst just now a beautiful song, that was made for the troubled. May help be as near every one who sings it as to thee; for know, thou art come at a most happy hour. It is only permitted me once a year to be at this spot; and whoever meets me here and deserves it as thou, him I make happy- if wealth can make him happy. Listen, then: when the bells ring midnight, leave thy cottage, and climb the mountain in silence to the ruins of Burg Osterode. Between the sunken walls thou wilt find a flower; pluck it, and instantly all the treasures of the heart of the mountain will be revealed to thine eye, from which thou mayest take as much as thou wilt. Go now thy way, and carry comfort and hope to thy wife. My time is expired."

The slender form, the pale, loving face, transparent as the moonlight, the long golden hair, were in a twinkling vanished.

Wonderfully cheered, the weaver hastened home to Osterode and related his vision to his suffering wife and little children, and they waited with impatience for the appointed hour. At last the leaden-footed hours had passed- it was midnight.

The weaver kissed his wife and hastened forth. It was a glorious night. The full moon shone, the quail sang her nightly song. The picturesque ruin contrasted wonderfully in its dark gray masses with the cloudless blue of the heavens and the silver moonlight.

A peculiar light shone out of an arched chamber; he followed it, and there sat the pale maiden, adorned with a wreath of white roses in her hair. She raised her jasper-blue eyes, looked kindly on him, and beckoned him to approach and gather the shining flower.

The weaver obeyed and tremblingly plucked the lily. Hardly had he the flower in his hand when a fearful, rumbling sound arose in the heart of the mountain, the ground close to his feet sank crashing into the depths, and a huge cauldron rose in flame, filled to the brim with glittering gold pieces. The maiden bade him take what he would, for he was so overcome with astonishment and terror that he could not move.

At her friendly voice he recovered from his fear, filled pockets and hat with the coins, bowed low and reverently, left the magic chamber, and hurried back to his cottage; and the sun rose on two happy people. Every anniversary of the day they went to the ruins to thank the fairy, who, however, ever afterward remained invisible.

Read more Harz Fairy Tales. See Osterode on a Map of the Harz