How the River Ilse got its name

Published in the collection Legends and Tales of the Harz Mountains, by Toofie Lauder in 1881. 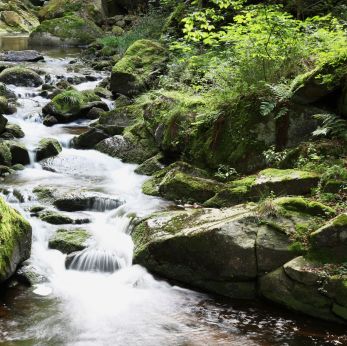 The beautiful Princess Ilse, daughter of King Ilsing of Schloss Ilsenburg, having ridden to the chase with her royal father, and her lover the Ritter Ralf, lost her way on the wild mountains, and came at nightfall to the gates of the fairy world, over which the Fairy Queen of the mountains rules. The Queen met her with kindness, and invited her to enter her gorgeous crystal palace.

Hesitating and with fear she followed the powerful sovereign; gnomes and cobolds attended everywhere with homage.

Beautiful Ilse tarried a whole year in the richly adorned subterranean world, witnessed the mysterious government, policy and life of the fairies, the creations and destructions by the king of the giants, the hostile relations of the Fairy Queen to the Giant King, the unhappy loves of her children Rumar and Romar, and what she could not understand the amiable Queen explained to her, and introduced her fully to the fairy world.

But all the splendour and glory of this fairy realm could not still Ilse's longing for her beloved Ralf, and the light of the upper world.

She demanded her return, which her fairy Majesty granted, but threatened her with destruction, should she ever reveal to mortals what she had seen.

Princess Ilse returned to the friendly light of day and rejoiced in the fidelity of her lover.

But he threatened her with the loss of his love if she did not tell him where she had been so long a time, and what she had seen.

The two lovers seated themselves on the soft moss. Ilse laid her lovely head upon Ralf's breast, and gazed up into his face with her wonderful and faithful eyes. Ralf laid his hand upon her shoulder, and beautiful Ilse began her tale.

With caresses she betrayed the secrets entrusted to her, and described the magnificence of the Fairy Queen.

The new moon rose and the stars appeared one after another in the dark-blue heavens; fair Ilse chatted on, related the legends of the Harz, of the giants and dwarfs.

Ralf listened at first in silent astonishment, and hung enraptured on the tales from her beautiful lips, then he began to dream and fancy, and at last fell asleep.

In the grey of the morning, as he awoke, he heard the murmuring tones of the Princess, and as he turned to salute the princely maiden, he saw, instead of Ilse, a crystal-clear bubbling spring illuminated with the dawn.

The water sprang gaily out of the soft moss, and murmured ever in a thousand leaps and tiny waterfalls over the moss-strewn rocks down the vale.

Deepest despair seized Ralf's spirit; he knew now what he had done, and what had become of Ilse through her betrayed secret, a clear pure stream doomed forever to ripple and murmur through the mountains.

Ralf built a cottage near the spring, and when the new moon rose Ilse awaited him by the mossy bank, leaned her head caressingly on his breast, and he heard her sweet prattle till the blushing dawn spread her radiance over the silver ripplets, and then the fairy virgin vanished in the blue air.

Read more Harz Fairy Tales. Or hike to river's source on the Brocken.